2021-2022 Programs by Discipline | Golden Skate
Menu
Log in
Register
Navigation
Install the app
More options
Contact us
Close Menu
You are using an out of date browser. It may not display this or other websites correctly.
You should upgrade or use an alternative browser.

Daria Afinogenova LTU
SP: "I like it I like that Cha Cha Cha" by Tania Blanco, Ross Mitchell
FS: "Carry You" by Ruelle; choreo by Olga Zotova

Mariia Andriichuk UKR
SP: "Caught Out In The Rain" by Beth Hart
FS: "My Heart Will Go On" (from "Titanic" soundtrack) by James Horner, performed by Celine Dion

Frida Turiddotter Berge NOR
SP: "If I Ain't Got You by Alica Keys
FS: The Last Emperor (soundtrack) by Ryuichi Sakamoto; choreo by Sondre Oddvoll Boe

Anna Frolova RUS
SP: "Shahmaran"
FS: "Following a Bird Out of the Room"

Aleksandra Golovkina LTU
SP: "Rise Like a Phoenix" by Rossella Longo
FS: "Stand By Me" performed by Florence & The Machine; choreo by David Richardson

Manca Krmelj SLO
SP: "Vogue" by Madonna
FS: 'Epic" by Gustavo T. Vergara Jr.;
"Paralysed By Fear" by Susie Wilkins; "Sweet Dreams (Are Made Of This)" by Escala

Paula Margarido Pereira AND
SP: "Angel" by Tokio Myers
FS: "My Body Is A Cage" by Peter Gabriel; choreo by Bruno Esparbes

Sinem Pekder TUR
SP: "Overture: The Heat Is On In Saigon" by Seann Alderking
FS: "Hijo De La Luna" by Sumi Jo and The Prague Philharmonia; choreo by Jorik Hendrickx

Lia Pereira CAN
SP: "Listen To Your Heart by Per Gessle
FS: "Ochi Chernye (Dark Eyes)" by Yevhen Hrebinka; choreo by Asher Hill

Maryn Pierce USA
SP: "I Can Only Imagine" by MercyMe, Bart Millard
FS: "Catch Me If You Can (soundtrack)" by John Williams
choreo by Ben Agosto, Becky Calvin

Julia Sauter ROU
SP: "I Can't Go On Without You" by Kaleo Cover
FS: "Me Before You" by X-Ambassadors, Unsteady, Erich Lee Gravity Remix

Joanna So HKG
SP: "Good To Mama" from Musical Chicago by John Kander
FS: "Phantom Of The Opera" by A. L. Webber; choreo by Derrick Delmore

Yuhana Yokoi JPN
SP: "Malaguena" by Ernesto Lecuona
FS: "Fat-Bottomed Girls," "We Will Rock You," and "We Are the Champions" by Queen

Euken Alberdi ESP
SP: "One" by U2; "New Years Day" by U2
FS: "Eye Of The Tiger" by Survivor; "Wind Of Change" by Scorpions; "Hold The Line"'by Toto; choreo by Patrick Capmartin, Stephane Lambiel

Kevin Aymoz FRA
SP: "The Question Of U" by Prince
FS: "Outro by M 83;" choreo by Silvia Fontana

Vasil Barakhouski BLR
SP: "One" by U2; "New Years Day" by U2
FS: "Eye Of The Tiger" by Survivor; "Wind Of Change" by Scorpions; "Hold The Line" by Toto; choreo by Patrick Capmartin, Stephane Lambiel

Edrian Paul Celestino PHI
SP: "In This Shirt"
FS: "You & Me" (The Wildfire) by Aron Wright; "You" (Piano & Strings Sessions Version Instrumental by Future of Forestry; choreo by Milena Todaro, Julie Marcotte

Younghyun Cha KOR
SP: "The Godfather Suite" by Nino Rota performed by Drew Tretick
FS: "The Phantom of the Opera" by A. L. Webber perf by Parague Cello Quartet

Luc Economides FRA
SP: "I Like It" by Cardi B
FS: Charlie Chaplin Medley; choreo by Florent Amodio

Paul Fentz GER
SP: "Wire to Wire" by Razorlight
FS: "Rock You Like a Hurricane by Scorpions; choreo by Adam Solya

Matthew Nielsen USA
SP: "Cry To Me" And "Take You Down" by Solomon Burke, Daniel Pemberton
FS: "Found," "Bernini’s Angels," and "Only The Winds" by Kerry Muzzey, Olafur Arnalds; choreo by Nadezda Kanaeva, Tom Dickson

Daniil Samsonov RUS
SP: Prelude in C Sharp Minor (Op. 3 No. 2) by Sergei Rachmaninov
FS: " I Love You" by Woodkid; "Come Together" by The Beatles

Thomas Stoll GER
SP: "Despacito;" "Bailar"
FS: "Back to Black" by Oscar and The Wolf; choreo by Panagiotis Polizoakis

Priyam Tated IND
SP: "Driving With The Top Down" by Ramin Djawadi from the Iron Man soundtrack
FS: The Pirates of the Caribbean soundtrack

Nicola Todeschini SUI
SP: "Ne me quitte pas" performed by Slimane
FS: "In This Shirt" by The Irrepressibles; choreo by Adam Solya

Bennet Toman CAN
FS: "United States of Eurasia" by Muse; "Nocturne" by Chopin; "Pressure" by Muse

Piper Gilles & Paul Poirier CAN
RD: 'I Guess That’s Why They Call It the Blues" by Elton John; "I'm Still Standing" by Elton John
FD: "Long and Winding Road" by Paul McCartney, arranged by Govardo; choreo by Carol Lane and Juris Razgulajevs

Elizaveta Khudaberdieva & Egor Bazin RUS
RD: "Come Together" by Gary Clark, Jr., and "It's Raining Men" by Geri Halliwell
FD: "Lose Yourself" by David Garrett and "Rain, in Your Black Eyes" by Ezio Bosso; choreo by Nikolai Nikonov, Dina Akhmegareeva, and Fedor Polianski

Ekaterina Kuznetsova & Oleksandr Kolosovskyi AZE
RD: "Why Don't You Do Right" (from "Who Framed Roger Rabbit") by Big Bad Voodoo Daddy
FD: "Becoming One Of The People" ("Avatar" soundtrack); choreo by Nikolai Morozov

Lorraine McNamara & Anton Spiridonov USA
RD: “Hot in Here” by Nelly, “No Diggity” by Blackstreet, and “Hey Ya” by Outkast
FD: The Phantom of the Opera; choreo by Jimmie Manners, Elena Novak

Carolina Moscheni & Francesco Fioretti ITA
RD: "Miss You" by The Rolling Stones; "Since I Don't Have You" by Guns n' Roses; "Start Me Up" by The Rolling Stones
FD: Concerto No. 2 by Sergei Rachmaninov, performed by David Garrett; "The Fire Within" by Jennifer Thomas; choreo by Corrado Giordani

Gaukhar Nauryzova & Boyisangur Datiev KAZ
RD: "On Top of the World"
FD: "You Know I'm No Good" by Amy Winehouse

Sofia Shevchenko & Igor Eremenko RUS
RD: "I Feel Like I'm Drowning" (Royal Family Mix) by Two Feet
FD: "Heaven I Know" by Gordi
Trio No. 1 in D by Kirill Richter; "Rise of the Instruments" by Havasi; choreo by Alena Samarskaia

Viktoria Sinitsina & Nikita Katsalapov RUS
RD: "You Can Leave Your Hat On" by Joe Cocker and "Brick House" by Commodores
FD: "Piano Concerto #2" by Rachmaninoff, and "Rhapsody on a Theme" by Paganini

Jasmine Tessari & Stéphane Walker SUI
RD: "Just an Illusion" by Imagination; "A Woman in Love" by Barbra Streisand; "Can't Take My Eyes Off of You" by Gloria Gaynor
FD: "Habla Con Ella" by Alberto Iglesias

Chelsea Verhaegh & Sherim Van Geffen NED
RD: Blues: "New Shine" by Sophia Urista; Funk: "Walk That Walk" by Bakermat, Nik Hanson
FD: "War Of Hearts (acoustic)" by Ruelle; "Chalkboard" from The Theory Of Everything soundtrack by Johann Johannson; "Oh My My" by Ruelle; "Live Like Legends" by Ruelle

Daria Danilova & Michel Tsiba NED
SP: "Bad Guy" by Scott Bradlee's Postmodern Jukebox feat. Ariana Savalas
FS: "All by Myself" (Remastered) by Eric Carmen; "I’ll Be There For You"' (From “Friends”) by The Rembrandts; choreo by Joti Polizoakis

Annika Hocke & Robert Kunkel GER
SP: "All Your Love On Me" by ABBA; "Voulez-Vous" by ABBA
FS: "The Other Side" by Ruelle; choreo by Anna Cappellini, Luca Lanotte, Joti Polizoakis

Chloe Panetta & Kieran Thrasher CAN
SP: "Can't Feel My Face" by The Weeknd
FD: Beatles Medley by The Beatles; choreo by Julie Marcotte

Jeanie19 said:
Who is the choreographer?
Click to expand...

Even more of last season's programs can be viewed here: 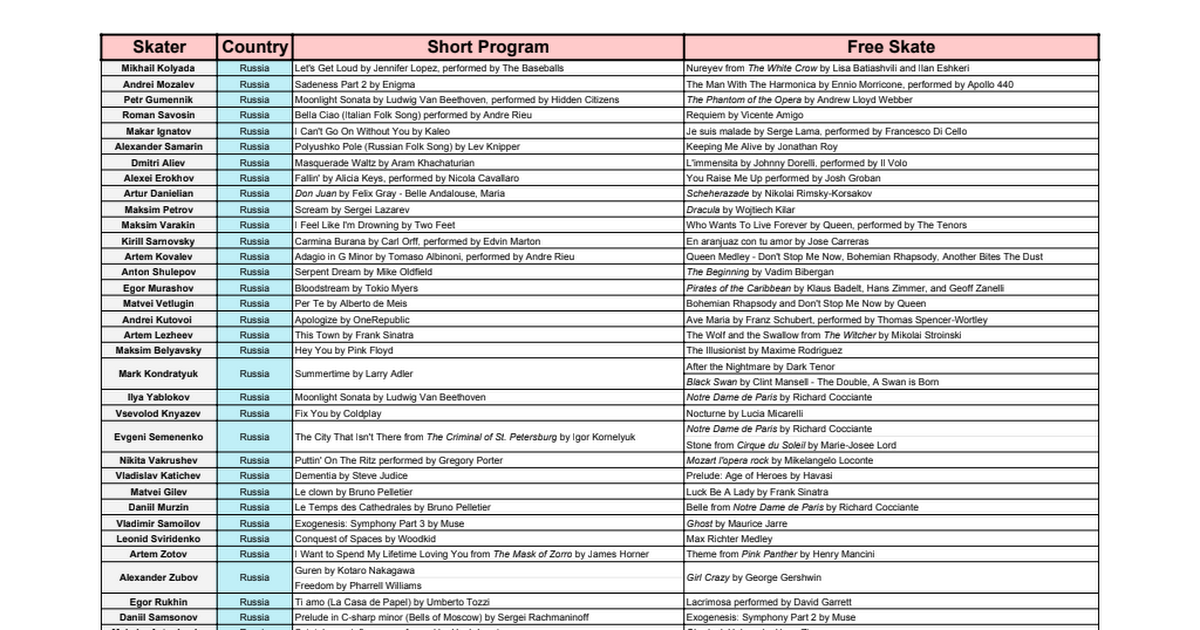 Men Skater,Country,Short Program,Free Skate Mikhail Kolyada,Russia,Let's Get Loud by Jennifer Lopez, performed by The Baseballs,Nureyev from The White Crow by Lisa Batiashvili and Ilan Eshkeri Andrei Mozalev,Russia,Sadeness Part 2 by Enigma,The Man With The Harmonica by Ennio Morricone, performe...

There are further replies to the tweet from both (and then she started liking tweets about the prospect of an Elton program).

There are further replies to the tweet from both (and then she started liking tweets about the prospect of an Elton program).
Click to expand...

I'm really excited for this program! The costumes will surely be the best

Kudos for Piper and Paul for always being original instead of doing what everyone else is doing at the risk of looking silly (not in the good way). Not everyone can pull off hip hop as we've seen previously and I wish more teams could recognize their own weaknesses instead of making fools of themselves

Wakaba Higuchi (Japan):
Music has yet to be announced, but the choreographers have:
SP: Jeff Buttle
FS: Shae-Lynn Bourne

Yuma Kagiyama (Japan):
He is supposedly keeping his Vocussions SP from last season.

It’s not over till it’s over

Kamila Valieva will be keeping her Bolero FS for next season.

MuseGuy11 said:
Wakaba Higuchi (Japan):
Music has yet to be announced, but the choreographers have:
SP: Jeff Buttle
FS: Shae-Lynn Bourne

Yuma Kagiyama (Japan):
He is supposedly keeping his Vocussions SP from last season.

Minz said:
Kamila Valieva will be keeping her Bolero FS for next season.
Click to expand...

Theese three posts in a row

I’m fine with both of them using Bolero. The music fits an Olympic program. If Camilla and Shoma make it to Olympics I’m sure both of them will get a standing ovation from the Olympic live audience.

Last Olympics Shoma had the same FS music as Sui & Han and they both won medals — obviously trying to repeat that success by pairing with Valieva.

I feel a Bolero heavy season coming....
I

Probably lots of oriental program seeking attention from the olympics audience in China. Some tacky culturally appropriation costume and memoirs of a geisha programs even though thats japanese.

better than a Romeo and Juliet heavy season