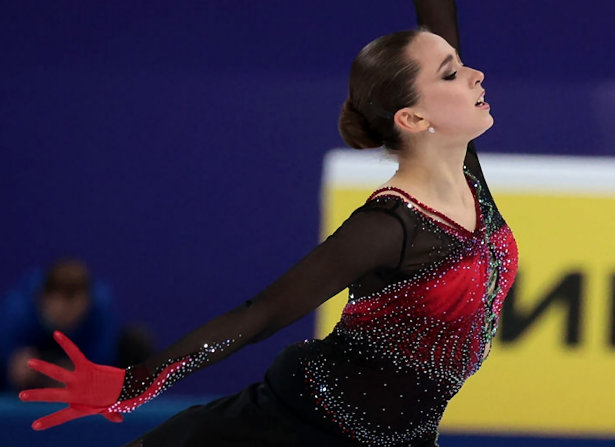 Valieva nailed all of her jumps in her routine to “Bolero” including a quad Salchow, triple Axel, quad toe-triple toe, quad toe-Euler-double Salchow. The 2020 World Junior Champion also showed level-four footwork and spins throughout, earning very high grades of execution (GOE) on nearly all elements. She earned a new personal best and record score of 185.29 for first place in the free skate, as well as a new record total score of 272.71 to finish first overall.

“I am very happy that I was able to skate almost well today,” said Valieva. “There was one little mistake when I did a double Salchow instead of a triple, so it was not yet my maximum. I am glad that I was able to go out calmly and show what we have worked on. I really enjoyed skating today.”

While the 15-year-old surpassed the winner’s score in the Men’s event, she was clear when asked if she would want to compete with men. “I wouldn’t like to compete with the men. It’s a little bit easier for the men with the quads and the triple Axels as they have more muscles. I think male and female skating is very different and I like my category.”

Valieva is excited about the upcoming Grand Prix Final and is looking forward to trying Sushi.

“It’s such a famous Japanese dish,” she said. “When our girls (Anna, Sasha, Alena) went to Japan, they brought back some amazing Japanese candies, so I would like to try this as well. I would love to walk around a bit, but as the event will be held in a bubble, I will have to enjoy Japan from the window.”

Skating to “Arabia” and “My Love…Music,” Tuktamysheva landed her triple Axel-double toe, but then stepped out of the solo triple Axel. The 2021 World silver medalist went on to land six more clean triple jumps while showing level four footwork and spins to finish third (149.13) in the free skate. With a total score of 229.23, she maintained second overall.

“Today I was a little bit tired ahead of my performance,” admitted the 25-year-old. “I was fighting for all the jumps and I think the audience and the judges saw it, but I am still happy because the skate was not bad and after this tough week I am going to the Grand Prix Final. Now I just want to rest and sleep.”

Tuktamysheva felt anxious and was apprehensive about her COVID-19 test as she wasn’t feeling well, but it was negative.

“I hope my body will last through this season,” she said. “Alexei Mishin has taught me many lessons in life and figure skating. We have gone through a lot of things together. Our bond is really strong because we went through a lot together. The most important thing in a coach-student relationship is trust and I think I have that with my team. I am very thankful to them and want to give them as much back as I can.”

When asked about including quads in her program, the skater said: “We are not training a quad right now. We concentrate right now on the quality of all my elements. I personally would like to do it, but maybe when everything is a bit more calm. But right now it’s not the time for trying.”

Khromykh landed a solid quad toe-double toe in her tango routine, but stepped out of the solo quad toe. Nevertheless, the Gran Premio D’Italia silver medalist landed six clean triple jumps while showing level four footwork and spins. She finished second in the free skate (154.97) and rose from fifth to third overall (219.69) to capture her second Grand Prix medal in her senior debut this season.

“I am glad I was able to fix the mistakes from Italy,” said the 15-year-old. The second quad toe wasn’t optimal, but I am happy I could pull myself together and show almost my maximum today.
I think I could have done better all over the Grand Prix series. There were some errors, but overall I think I did pretty well.”

USA’s Mariah Bell landed five clean triple jumps, but put a hand and foot down in a triple Salchow in her routine to “Hallelujah” by k.d. lang.  The 2021 Cranberry Cup bronze medalist also received a level four for all spins and footwork and finished fourth in the free skate and overall (140.98/210.35).

“I am really happy,” said the 2020 U.S. silver medalist. “I had a lot of improvement since my last competition in France. My technical content is a little bit lower right now, but I plan to put the triple-triple back in later during the season. Next competition will be Zagreb. I am planning to put the triple-triple back in there, to show the same content there, which I plan to do at nationals.”

Loena Hendrickx of Belgium placed fifth (139.25) in the free skate and overall (203.69). The only mistakes in her routine was a turn out after the first jump in a triple Lutz-triple toe and an underrotated triple toe. She otherwise landed four clean triple jumps while displaying level-four spins and footwork.

“Overall, I am much happier with my performance today,” said the three-time national champ. “The triple loop has always been a challenge for me. Last week, it was pretty consistent so we tried it today. It wasn’t perfect today, but I had nothing to loose, so I gave it a try.”

Hendrickx will compete next at Europeans.

Canada’s Madeline Schizas, who stood in fourth after the short program, finished seventh in the free skate (124.32) and sixth overall (192.14). The national bronze medalist stepped out of a triple flip and double Salchow, but landed five clean triple jumps.

“I was happy with my skate today,” said Schizas. “It was not totally what was I hoping for, but I showed a good fight. This is the biggest audience I’ve ever skated to. I think it was a great experience for hopefully the Olympics and World Championships. I was really motivated improving in between my two events, to put my chances up qualifying for the Olympic team.”

Viktoria Safonova of Belarus delivered a clean program which featured seven triple jumps while showing level four spins to finish sixth (127.45) in the free skate. With a total score of 185.64, she rose from ninth to seventh place overall (185.64).

Japan’s Rino Matsuike took a fall on an underrotated triple Lutz and underrotated and stepped out of the back end of a triple Salchow-triple toe in the latter half of her routine to “Moonlight.” The 17-year-old finished eighth overall (184.36).

“I have many regrets about both of my programs,” Matsuike admitted. “I want to turn it into something positive to train more towards nationals where I aim for a clean performance. This was my first Senior Grand Prix circuit and I feel really honored that I was allowed to participate in two events. I feel like I couldn’t fully use the chance I was given, but I hope there will be more opportunities in the future.”

“I want to get my triple Axel and also my quads,” she added. “We live in an era where you cannot compete without these elements. I really want to work on them and put them into my programs. This is my first time in Russia and I was so impressed by the fast rotation of the Russian skaters. I could also see some of the off-ice training they are doing and I can take a lot from this experience for myself.”

With the six Grand Prix events concluded, the unofficial standings for the Women’s discipline going into the Final are as follows: