The Team Event in Figure Skating at the 2022 Winter Olympics kicked off with the Men’s Short Program on February 4, 2022, at the Capital Indoor Stadium in the Haidian District of Beijing. Member nations that qualified for the event include: Canada, China, Czech Republic, Georgia, Germany, Italy, Japan, Russian Olympic Committee, Ukraine, and the United States. The teams qualified by getting points according to the results at the ISU Championships and ISU Grand Prix/Junior Grand Prix of Figure Skating (see ISU Communication N°2443 for full entry lists). 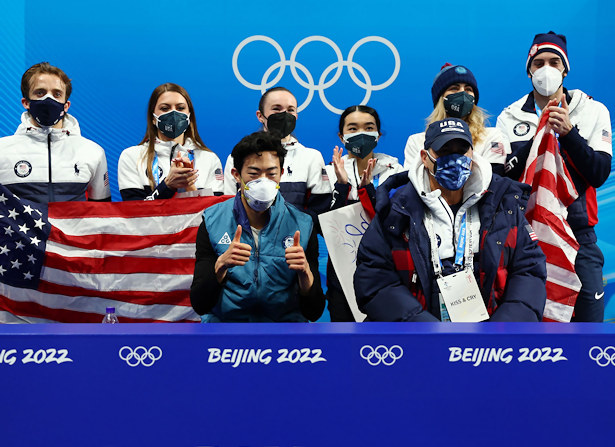 Three-time World Champion Nathan Chen (USA) topped his previous personal best from the 2019-20 Grand Prix Final with 111.71 points after his skate to “La Boheme” by Charles Aznavour. He produced a solid quad flip, triple Axel, quad Lutz-triple toe, and earned a level four on all spins and footwork. The flip and steps were particularly good, earning many high grades of execution (GOE) from the judging panel across the board.

Mark Kondratiuk (ROC) held onto the landings of his quad Salchow-triple toe and triple Axel, but the quad toe was solid in his skate to music from the Magnificent Century: Kösem soundtrack. The 2022 European Champion scored 92.37 for third place.

Morisi Kvitelashvili of Georgia landed a quad Salchow-triple toe and quad toe, but fought for the landing of a triple Axel. The 2020 European bronze medalist finished fourth (92.37). 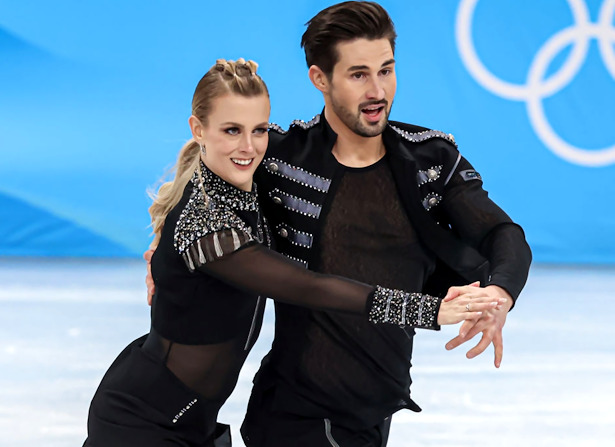 Madison Hubbell and Zachary Donohue of Team United States compete in the Ice Dance Rhythm Dance during the Beijing 2022 Winter Olympics at Capital Indoor Stadium on February 04, 2022 in Beijing, China.

USA’s Madison Hubbell and Zachary Donohue put out a solid routine to music by Janet Jackson which featured fast level-four twizzles and very good stationary lift. The 2021 World silver medalists earned a level three for the midnight blues, pattern dance, and midline steps, and all elements received high GOEs. They finished first with a new personal best of 86.56.

Victoria Sinitsina and Nikita Katsalapov (ROC) were confident in their hip and engaging routine to “You Can Leave Your Hat On” and “Brickhouse.” The 2021 World Champions earned a level four on their midnight blues steps in which they met all key points, however, he wobbled on a twizzle which was graded a level three while hers were a level four. Both the midline and pattern steps were graded a level three and the rotational lift garnered many high GOEs from the judges. They finished a close second with 85.05 points.

Piper Giles and Paul Poirier of Canada received a level three for the twizzles and midnight blues steps, however, the rotational lift was scored a level four. The 2021 World bronze medalists finished fourth with 82.72 points. 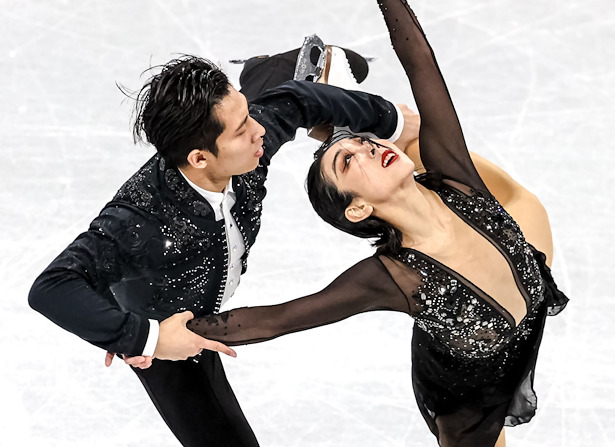 Pair skaters Sui Wenjing and Han Cong of China perform during the team short program event at the Capital Indoor Stadium as part of the 2022 Winter Olympic Games.

Reigning Olympic silver medalists Wenjing Sui and Cong Han were flawless in their routine to music from the Mission Impossible 2 soundtrack. They landed solid side-by-side triple toes and throw triple flip, and the spins, footwork, and triple twist were graded a level four. All elements received very high GOEs and the team finished first with a new personal best of 82.83 points.

Anastasia Mishina and Aleksandr Galliamov (ROC) were also solid in their short program to La Esmeralda, earning a new personal best score of 82.64. The 2021 World Champions delivered a very good triple twist, throw triple flip, and side-by-side Salchows. All elements, including the twist, were graded a level four with many positive GOEs and their total element score was a tad higher than the leaders.

USA’s Alexa Knierim and Brandon Frazier earned a new personal best of 75.00 for their short to “House of The Rising Sun” by Heavy Young Heathens. The 2021 Internationaux de France bronze medalists produced triple toes, a throw triple flip, and earned a level four on the twist, spin, lift, and steps.

The up-and-coming Japanese team of Riku Miura and Ryuichi Kihara impressed with a throw triple Lutz, triple toes as well as a level-four lift and steps. The 2021 Skate America silver medalists finished fourth with a new personal best of 74.45 points.

2022 Olympic Figure Skating Standings for the Team Event after Day 1.

“We have an incredibly strong team and everyone is the most prepared they have ever been,” said Team USA’s captain Madison Chock. “We have complete faith that this momentum will keep building, and we are setting ourselves up for the rest of the team event.”

Her partner, Evan Bates, agreed: “Very, very proud of Team USA today. They really set the tone for the team event. I was really excited to be sitting rink side and to witness those Olympic performances. It was just a very special day for USA.

“Our team has great potential and that was demonstrated today in the great performances,” he added. “I don’t necessarily think that we feel surprised to be leading the team event. Looking at the roster, we know we have the potential to bring home the gold medal.”

Team ROC’s captain, Nikita Katsalapov, felt they had a good performance and is looking forward to the Women’s short program.

“I am sure Kamila Valieva will do very well,” he said. “There is no doubt she is very well prepared, and all of those who have done their short programs now have time to catch their breath and prepare for free skating.”

“We have an extremely talented team,” he said, regarding Team ROC coming in as the main headliners. “Everyone did their utmost. It’s unfortunate about that (that they are in second place), but there is still the free skating to make up for it. Provided everyone does what they should, the result will be exceptional.”

Sui Wenjing feels that she and partner Han Cong are fully prepared to skate for Team China in the Free Skate and that it would give them more opportunity to show their abilities.

“It’s wonderful to be able to compete in the Olympics and also to get a very good result,” said Han. “It’s a great recognition for all of us.”

The Olympic Figure Skating Team Event will continue on Feb 6, 2022, with the Women’s Short Program and Men’s Free Skate.